Electronic Arts has confirmed that the pre-release trial for Unravel will only grant access to the first two levels of the game. The restriction will be imposed on trials for its upcoming platformer acquired via EA Access for the Xbox One, or its newly established counterpart on PC, Origin Access.

As a part of these services, the publisher offers 10 hour trials for all its upcoming games ahead of the title’s official release. While this will be honored with Unravel, only the first two stages will be accessible before a purchase of the full game is required. The ‘Play First Trial’ for Unravel be available from February 4th as a member of EA Access or Origin Access, before its public release five days later. If upgrading from the trial, EA has clarified that progress will transfer over to the full game.

The content accessible in the trial will most likely be justified by the estimated completion time, which is expected to fall short of the ten hour mark. This isn’t the first time that titles have been cut back during their trial period, such a Battlefield: Hardline, which has its single-player campaign restricted to the first mission.

EA Access is available on Xbox One for $4.99 per month, or an annual payment of $29.99. Most recently Electronic Arts rolled out Origin Access; a similar service for PC via its distribution platform Origin, costing the same monthly fee. Both services provide access to pre-release game trials, discounts and full versions of select Electronic Arts titles. The list of games offered as a part of the program is updated frequently and varies between the Xbox One and PC versions of the service.

The Windows Phone game Catapult King is an entertaining arcade game where you find yourself having to rescue a Princess from the evil grips of a fire-breathing dragon. Armed with a catapult, you must battle your way through the dragon’s strongholds and crush his evil knights.

We liked Catapult King when we first reviewed the Windows Phone game and continue to find the game to be a fun time waster. Catapult King is normally priced at $.99 and through the myAppFree promotion, over the next twenty-four hours, you can pick up Catapult King free. It’s a great opportunity to pick up a fun game and save a little along the way.

Catapult King has you lugging your trusty catapult across the lands to rescue your Princess from the clutches of a fire-breathing dragon. The Windows Phone game has over 100 levels to tackle, plenty of enhancements to unlock for your catapult and plenty of forts full of knights to demolish.

Gameplay for each level has you trying to demolish the enemy strongholds and any knights within. You have a limited number of shots for each level and game mechanics are fairly straightforward. Tap/hold on the boulder that sits in the catapult’s sling and slide your finger down on the screen (essentially pulling back on the sling). An aiming arrow will appear between the catapult’s arms to help you aim your shot and a wheel is present at the base of the catapult to adjust your elevation. The only thing missing is a trajectory line to assist you in aiming the catapult.

Release your hold on the screen to launch your catapult’s boulder and when all the knights are crushed, the level is complete. Along the way you can enhance your catapult with magical shots to increase the damage it inflicts and gaming screens can be pinched to zoom into your targets. 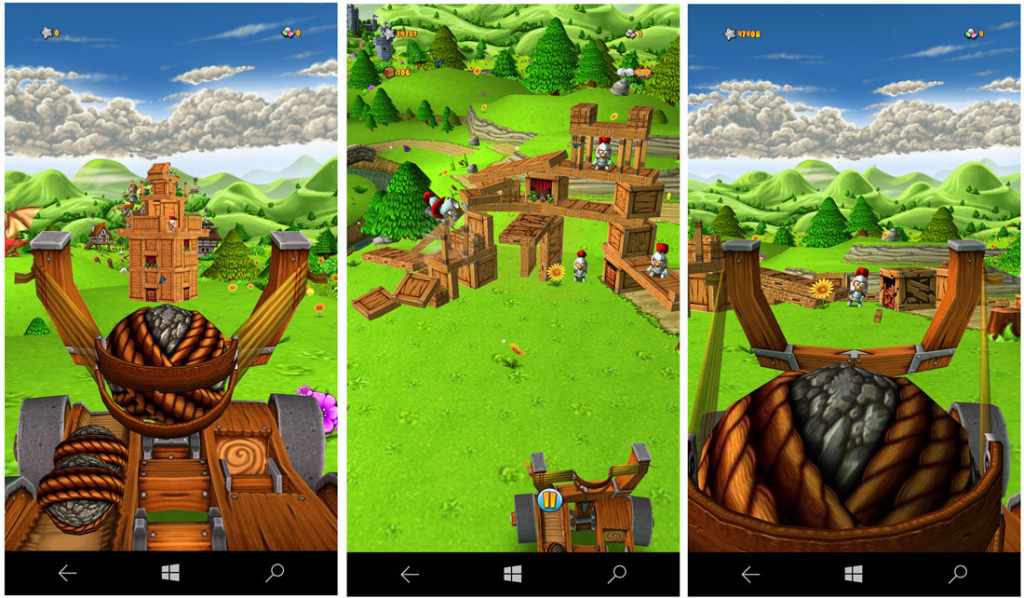 All in all, Catapult King is a fun game for your Windows Phone with nice graphics and challenging gameplay. Regularly priced at $.99, you can pick up Catapult King for free through the myAppFree Deal. The game is also available for Windows PC through the deal, but unfortunately, gaming progress does not transfer between devices.

Please note that it may take a little time for this deal to go live in your market (or the myAppFree app) due to time zone differences. At the time of posting, the deal was reflective in the U.S. Market.

Microsoft has just pushed out a nice update for their new Microsoft Solitaire Collection Windows 10 app that fixes a few bugs and brings some subtle new features to the game.

Among the bugs squashed with this update were ones involving disappearing undo buttons in certain modes, incorrect Daily Challenge counting, and inaccurate Daily Challenge star ratings. The new features added include a new mode for first-time players to help introduce them to the game, smarter card stacking in Klondike, Spider, and FreeCell, and a new portrait mode for users playing on phones running Windows 10 Mobile.

A new visual theme has also been added however it isn’t so much an interesting new visual design but one made for the visually impaired. This new Jumbo theme features big bold lettering and numbering on the cards and should make the game a lot easier to play for those with poor eyesight on a Windows 10 device or playing on a small smartphone screen.

Not included on this update are the long-awaited leaderboards which have been listed as “coming soon” since Microsoft Solitaire Collection launched alongside Windows 10. This feature is a strange omission since this and the previous version are connected to Microsoft’s Xbox Live gaming network which is designed to connect gamers with each other in addition to granting Xbox Achievements and provide cloud saves.

Microsoft has released a fairly good collection of casual games on the Windows platform with apps covering gameplay based on digital jigsaws and mahjong to minesweeper and slots. While all of their casual games are Xbox Live enabled, currently only Microsoft Solitaire Collection and Microsoft Bingo have been upgraded to the new Windows 10 Universal App format which allows them to be played across Windows 10 devices and also connect to the newer version of Xbox Live running on the Xbox One.

The long-in-development sequel to the first-person shooter Homefront finally has a specific release date. Publisher Deep Silver has announced that Homefront: The Revolution will be released on May 17 for the PC, Xbox One and PlayStation 4 platforms. The Xbox One will get an exclusive closed beta of the game in February.

Like the original game, Homefront: The Revolution depicts a near-future United States that is under armed occupation by North Korea:

“As a Freedom Fighter in the Resistance, you’ll uncover safe houses and other tactical locations from which to mount an attack; you’ll disrupt KPA propaganda, disable their security, and infiltrate and destroy high value targets; you’ll intervene to save civilian lives, or assassinate high ranking officials… each action a step forwards to your ultimate goal – Revolution…
Homefront: The Revolution has had a rather long and convoluted history. The original Homefront game was developed by Kaos Studios and published by THQ in 2011. Then, Crytek announced it would work on a sequel to Homefront for THQ. Later, Crytek bought the Homefront rights as part of THQ’s bankruptcy and revealed it would continue developing the game. In 2014, Crytek sold off the game’s rights to Deep Silver, and is now making the game with its in-house developer Dambuster Studios.

The Xbox One closed beta will allow players to check out online co-op missions from the full game. A specific launch date was not announced.

The original reveal trailer from E3 2015 listed the game for a Holiday 2016 release, but it looks like we’ll be getting our hands on it a little earlier than expected.

The E3 gameplay revealed a darker, near-survival horror motif for the next Gears. Equipped with flashlights, new Gears soldiers JD and Kait move through abandoned city ruins on the hunt for a Pouncer, a new monster type. Although the trailer revealed little regarding new gameplay mechanics or story direction, expect news about that to materialize as soon as February, where the official Xbox magazine will run an exclusive Gears 4 cover story.

The Coalition also revealed that 45% of the 1 million plus owners of the Ultimate Edition were entirely new to the franchise, giving further indication that Gears of War 4 will be a system seller. As of 2014, the Gears of War franchise had grossed over $1 billion dollars, with sales of around 22 million copies across the entire series. That’s a lot of Gears fans.

The Coalition’s Rod Fergusson previously said that the studio’s work, re-mastering the original Gears of War, helped them get to grips with the series’ roots – which is where Gears of War 4 seems to be headed.

…”It was really our way of deconstructing nostalgia, and going back to our roots. It allowed us to talk about philosophical things, like ‘What makes Gears, Gears?’ That notion of cover distances, spawning in waves, the idea of intimate violence.”…
Check out our full list of most anticipated 2016 Xbox One titles, where Gears of War 4 is a firm fixture.