key highlights about the Falkor core

Falkor was designed from the ground up specifically for the cloud datacenter server market. It is 64-bit micro-architecture with fully ARMv8 compliant.

Designed for performance, optimized for power:

Qualcomm Falkor CPU is designed to deliver high-end compute performance using a 4-issue, 8-dispatch heterogeneous pipeline. Falkor’s heterogeneous pipeline is designed to optimize performance per unit of power, with variable length pipelines that are tuned per function to maximize throughput and minimize idle hardware. Additionally, Falkor’s out-of-order and rename resources are sized to prevent instruction retirement from being in the performance-critical path, allowing unbridled usage of the multiple execution engines. Other performance-critical elements of the micro-architecture, such as branch prediction algorithms and the cache hierarchy, are state-of-the-art for today’s server class processors. A plethora of sophisticated power management techniques were baked into the design from day one, including such mechanisms as independent p-state control for each of the CPUs and L2, with entry to and exit from low-power states controlled by hardware state machines for ultra-fast state transitions, and hardware state retention for power-collapsed sleep states with ultra-fast recovery.

Qualcomm Falkor CPU is ready for multi-tenant and other virtualized workloads with the full suite of ARM Execution Levels (EL0-EL3) and TrustZone secure execution environment. Falkor supports the ARMv8 instruction extensions to accelerate cryptographic transform and secure hash operations needed for efficient performance when running networking security protocols such as https. The new Falkor also delivers on the RAS mechanisms needed to keep a datacenter running, such as a fault isolation, reporting, and handling techniques.

System on a chip:

The 48 Falkor CPUs are brought together in a fully-integrated SoC, obviating the real estate, power, and cost of a separate chipset. The memory efficiency of the Falkor CPU is extended throughout the SoC with an extremely high-bandwidth and low-latency ring interconnect extending out to its large L3 cache and multiple memory controllers, avoiding on-die NUMA effects. In addition, the memory subsystem includes innovative shared resource management techniques such as L3 Quality of Service (QoS) extensions and effective memory bandwidth enhancement via in-line and transparent memory compression. The SoC also supports an on-die hardware-based immutable root of trust that authenticates firmware before the first line of firmware is ever executed. 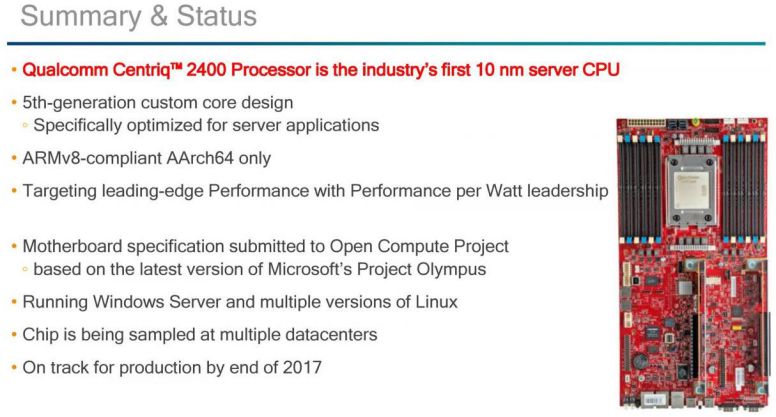 Meanwhile, the price of the upcoming desktop processors leaked on PC Canada website. It seems that prices are going upwards a bit, the Core i7 8700K would be roughly 5% more expensive, the i5 8600K nearly 8%. The rest stays under a 5% margin.

Today, Qualcomm has unveiled its Depth Sensing Camera Technology for Android devices. This is an expansion to its Spectra™ Module Program which will open mobile devices up to high-resolution depth sensing and better biometric authentication.

The program makes use of the same technology as Qualcomm’s Spectra ISPs which you will find embedded in the Snapdragon chips that power many of our phones, and this advances in the technology should eventually make its way to those SoCs.

“Whether used for computational photography, video recording, or for computer vision applications that require accurate motion tracking, it’s clear that power efficient camera image signal processing has become more important for the next generation of mobile user experiences. Our breakthrough advancements in visual quality and computer vision, combined with our family of integrated Qualcomm Spectra ISPs for Snapdragon, are designed to support an ecosystem of cutting edge mobile applications for our customers.”

Together, the new ISPs and camera modules are engineered to support superior image quality and new computer vision use cases that utilize deep learning techniques and bokeh quality image experiences with a faster time to market for smartphone and HMD devices.

The next-generation ISPs feature a new camera architecture designed for advancements in computer vision, image quality and power efficiency for the next Snapdragon Mobile and VR Platforms. The camera module program additions consist of a trio of camera modules, including an iris authentication module, a passive depth sensing module and an active depth sensing module.

The low-power, high-performance motion tracking capabilities of the Qualcomm Spectra ISP, in addition to optimized simultaneous localization and mapping (SLAM) algorithms, are designed to support new extended reality (XR) use cases for virtual and augmented reality applications that require SLAM.

Intel will announce 8th Generation Core Processors on August 21st. The company will preview PCs built on 8th-gen chips as well as a demo from a VR creator. The event will be live streamed on Intel’s Facebook page. Previously, the company announced its 7th-generation Core processors (Kaby Lake) on August 30, 2016.

According to earlier reports, the 8th-gen (Coffee Lake) will still be built on a 14-nanometer manufacturing process and shares a lot in common with its predecessors. However, various leaks suggest that the company will focus on more cores at similar power levels.

Both the Core i5 and Core i7 would move to six cores on the desktop, while you’d see four cores in the Core i3, Pentium, and some low-power laptop chips.

AMD today announced the Radeon Vega 56 and Vega 64. The company will also roll out its new Radeon Pro WX cards to the workstation market with two terabytes of memory.

AMD Radeon Vega 64 also includes 8GB of High Bandwidth Memory 2 (HBM2), and boasting 484GB/s of memory bandwidth. Surprisingly the Radeon Vega 64 will cost reasonable $500 for the air-cooled variant. Meanwhile, AMD Radeon Vega 56 cuts the number of Next-Gen Compute Units down to just 56, with up to 10.5 TFlops of performance. The graphic card will cost $399.

AMD will also offer Radeon bundles with a Radeon Vega GPU, $200 off the Samsung CF791, an ultra-wide 3,440 x 1,440 monitor with FreeSync, as well as $100 off a Ryzen 7 CPU and motherboard bundle. You will also receive two free games — Prey and Wolfenstein II: The New Colossus.

Intel Core i9 Processors are now officially announced. Today at Computex 2017, Intel unveiled its new Core X line desktop processors, offering even more powerful versions of its existing Core i5 and Core i7 models, as well as top-of-the-line Core i9. The Core X platform is being targeted at enthusiast customers like gamers or gamers and content creators. 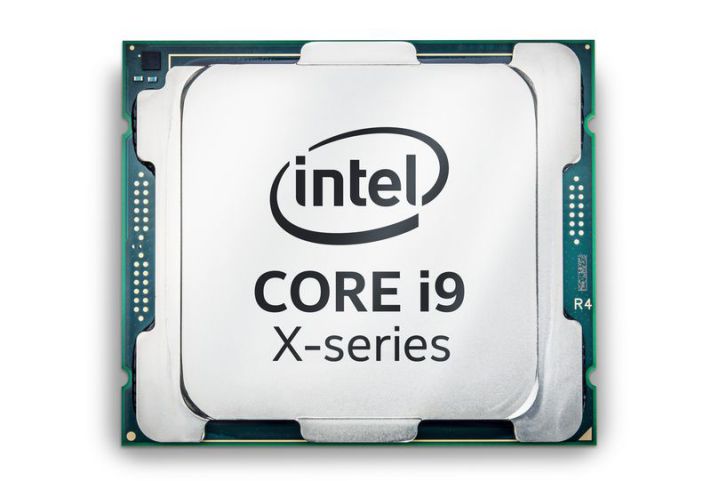 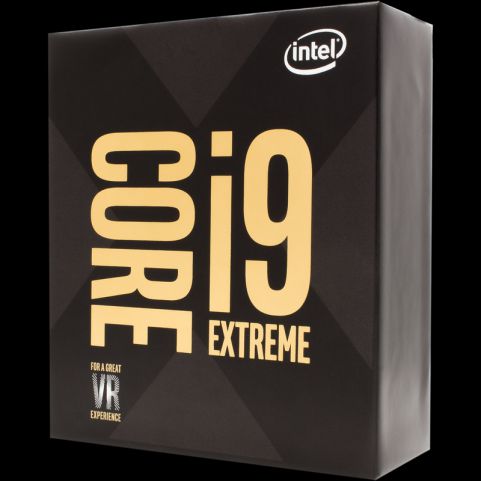 All the new desktop Core X processors are designed to work with Intel’s new X299 motherboard chipset. The Core X family is built on an updated version of Intel’s 6th generation Skylake platform, which the company refers to as Skylake X.

In addition to the new high-end Core X family, Intel also had a brief update on the forthcoming 8th-generation Intel CPUs, which may bring improvements up to 30 percent over Kaby Lake.

Samsung is preparing to unveil its stretchable display design at the Society for Information Display 2017 event at the LA Convention Center this week. The company is expected to reveal world’s first 9.1-inch dynamic stretchable AMOLED display.

The flexible display is already available in the market, which includes curved and rollable displays. While current flexible OLED is able to be transformed in only one side, this stretchable OLED can be curved, bent or rolled in both sides, above and below.

Samsung Stretchable Display could also move 12 millimeters in a direction and then settle when released like a balloon. This could potentially lead to smartphones screens that are less likely to crack, but also ones that could be expanded or shrunk depending on the situation.

The company is also expected to unveil a 1.96-inch UHD (3840 x 2160) with 2250 pixels-per-inch for VR. Samsung is also working on smartphones with folding displays, likely for release next year.

A new report suggests that AMD may launch 7nm 48-Cores Processor in 2018. The AMD internal roadmap leaked reveals current and upcoming processors line. AMD Zen 1 CPU line in 2017 and Zen 2 is expected to launch in 2018. Recent leaks also suggest that AMD rival Intel is also working on a high-end Core i9 Processors line.

According to the leaked slides, AMD is working on 48-core server processor with 96 threads based on Zen 2 Cores. That product has code-name Starship and would be based on 7nm Finfet. TDPs would run anywhere from 30W up to 185W. 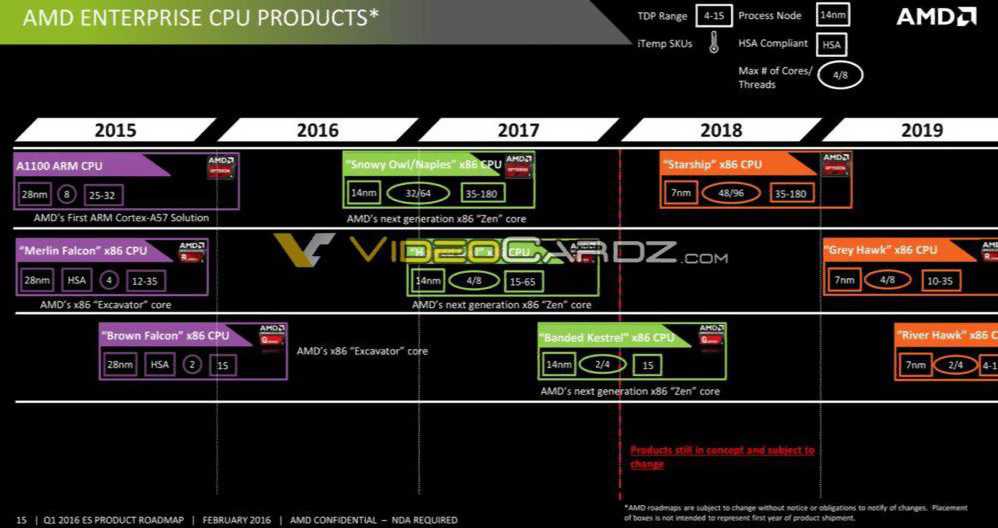 Intel may release Core i9 Processors to compete against the AMD Ryzen processors and their upcoming processor line. Intel’s top of the line flagship model will be a Core i9 7920X, this processor will feature a 12-core with 24 threads. AMD will release 16-core / 32 threaded Ryzen Whitehaven processors.

According to the leaked photo of an internal powerpoint presentation, Intel Core i9 processors are going to support quad-channel memory at 2667 MHz and will get a 160 Watt TDP, a maximum 16.5 MB L3-cache and 44 available PCI-Express lanes for inter -connectivity. 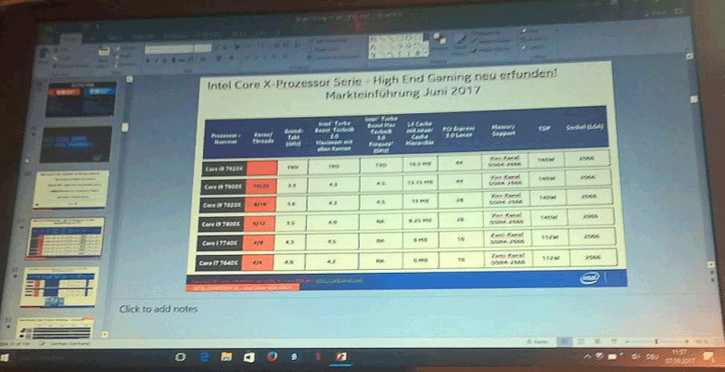 Here is what the rumored linup would look like:

The company may announce this new processor line in June. It is also stated that the top flagship Core i9 7920X will be available as late as August. Please do take all these leaks with a grain of salt.

Qualcomm has announced the Snapdragon 660 and 630. The new processors will replace the 653 and 626 respectively. Both are built on the company’s latest 14nm FinFET process. Both chipsets will include new features like Bluetooth 5 support. The chipsets will also include the All-Ways Aware hub, which is a collection of low-power sensors that provides things like step counting, location tracking, and other background activities without killing battery life.

The chipset also includes USB-C 3.1 support, a Quick Charge 4, and the X12 LTE Modem with 600Mbps, as well as some new video chops via the Spectra 160 ISPs (this processes the raw data from the camera).

The Snapdragon 660 will replace the reference A72/A53 cores from the 653 with Qualcomm’s Kryo 260 in-house design. According to the Qualcomm, it sees 20% gains over the 650 and 30% increase in GPU performance. It also has Dual Band Simultaneous 2×2 MIMO WiFi (read: fast). The Adreno 512 is now included. 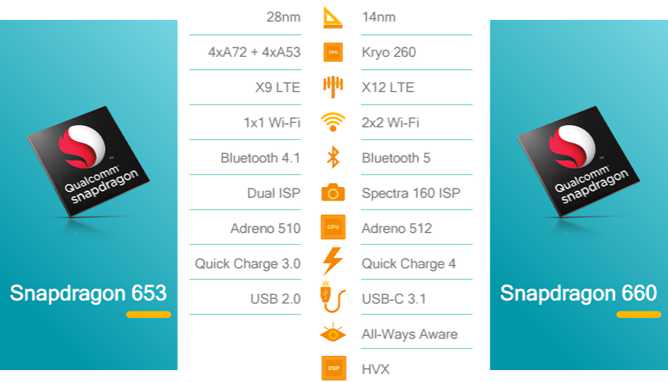 The Snapdragon 630 comes with eight ARM reference A53s with LPDDR4x support. Four of those are at 2.2GHz and four at 1.8GHz, with an advertised 10% bump in overall performance. It features the Adreno 508 GPU which has the same supposed 30% gains over the previous model, and the max resolution is also a bit higher than the 626 it is replacing, as it now supports up to QXGA (2048 x 1536). 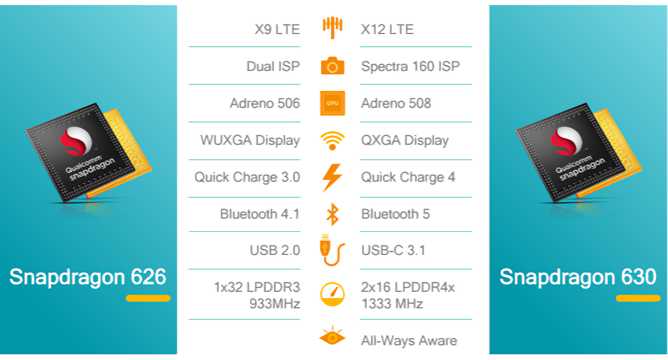 The Qualcomm Snapdragon 660 supported devices will arrive as soon as this quarter, while the 630 is going to be available at the end of May.