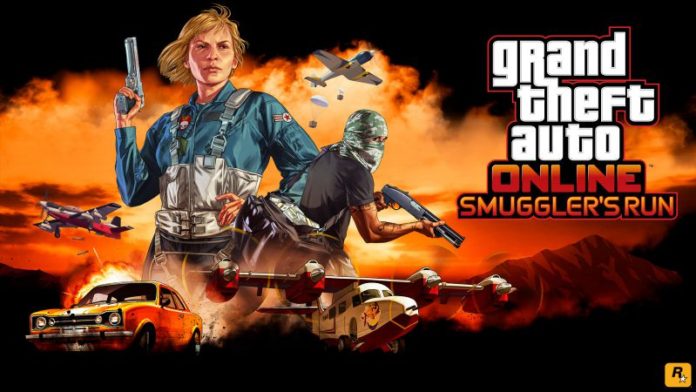 GTA Online Smuggler’s run update is now available on PS4, Xbox One, PCs. This free GTA 5 DLC sees players team up with Nervous Ron to make money as part of a new smuggling enterprise set in the sky. In addition to new planes and helicopters, Smuggler’s Run introduces a selection of aircraft hangars that serve as your HQ.

Rockstar Games is working on a new race mode that transforms your vehicles to match the course ahead. The new race types will launch ahead of returning holiday events, new game modes, and vehicles.

SEVEN NEW AIRCRAFT
The latest free DLC brings seven new aircraft from vintage dogfighters to miniature choppers to cold war bombers. These magnificent flying machines can be stored in your private Hangar, and customized using a range of options including engine and handling upgrades, countermeasures, liveries, weapons, bombs and more with the investment in an Aircraft Workshop. You can even drop off any aircraft in your Pegasus inventory and display (or store) them in your Hangar, allowing you to call them up as your own Personal Vehicle from the Player Interaction menu.

NEW APPAREL
GTA Online Smuggler’s run update brings new clothes and tattoos. So whether you’re an urban pirate, a fighter ace, or you just need some thermal and night-vision headgear for your next cargo sale, there’s something new in town for you.