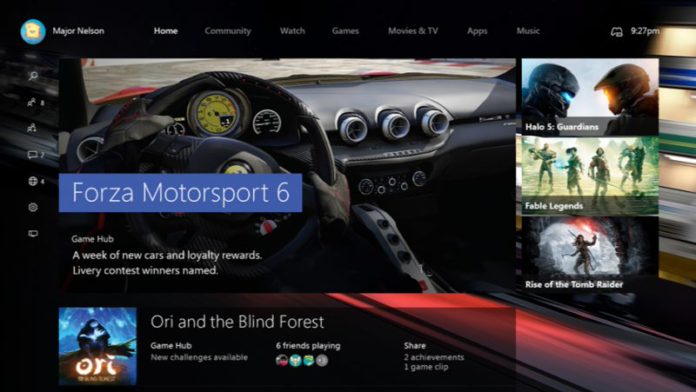 When first launching the new Movies & TV app, you will be taken to the home screen which only displays a few items from your collection. To view your entire collection of movies and TV shows, move the left stick on your controller to the left to expose the side bar menu, and select “Movies” or “TV” to see your full collection. On the home screen of the new Movies & TV app, if you select a new movie or TV show to purchase or rent, you will be taken to the product details page in the Xbox Store to complete the purchase.

Xbox Universal Store: Users may still be able to purchase Xbox 360 backward compatible games from the Store without entering their password when their profile is set to “Lock It Down”.
• Token redemption for Xbox Live Gold fails.

• Store pages for purchased games and apps sometimes still show a “Buy” button rather than an “Install” button. If you encounter this issue, please submit feedback via Report a problem.

• Users may still be able to purchase movies and TV shows from the Store without entering their password when their profile is set to “Lock It Down”.

• The “Buy” button for games promoted through Deals with Gold may fail to launch the purchase page, and instead launch the Gold Lounge.

• Snap Sometimes after powering on from connected standby and launching a full screen game or app, a black bar remains where content was previously snapped. Workaround: Quit and relaunch the game or app, or, snap new content and unsnap it.

• At this time it’s not possible to add, edit, or remove payment options on the console. Please use Xbox.com or another console not enrolled in Redstone to manage payment options.

• At this time it’s not possible to remove or change payment information associated with pre-ordered games.

• When selecting “Add new” to add a new profile, the add profile interface may take up to 30 seconds to appear.

• Cortana may take a longer than expected amount of time to use the play command in Xbox One Preview build.

• Cortana may sometimes restart and indicate she is “Warming up…” even after recent use.

• Pins If you have pins on your Home to movies, TV shows, or music, they will disappear from Home when that app takes its new app update. The pins for the apps will stay on your Home, easy to get to.

• My Games & Apps You may encounter an error when attempting to load Ready to Install with a large number of digital games and apps.

Issues with Windows 10 Build 14946 for Insiders