New Nvidia GeForce GTX 1050 graphic card announced. The latest entry-level graphic card will cost you $109. The Nvidia new graphic cards will compete against AMD. The latest Nvidia entry level cards are based on the Pascal-powered GTX 10 series of graphics cards and budget-friendly.

A new HP Envy AIO 27 PC is announced. Envy AIO 27 is completely redesigned by HP. The company slimmed down the overall footprint with a micro-edge display for a sleeker look. The Envy AIO 27 didn’t get 7th Gen Intel Kaby Lake, but instead you get 6th generation (Skylake) Intel Core i5 and i7 processors. All in One HP PC now includes up to 16GB of memory and up to a 256GB SSD and 2TB HDD combo.

Four-speaker sound bar built right into the base, and you control the volume with an easy-to-access dial on top of the base. The Envy AIO 27 includes two HDMI ports and a USB Type-C port that supports video output. You can order HP AIO 27 PC later this month with starting price $1,300.

AMD has launched 7th generation Bristol Ridge APUs for desktop PCs. The latest Bristol Ridge APUs will be available for sale through several OEM manufacturers like HP, Lenovo, Dell, and more. AMD has done some fine tuning with their latest processors and that has increased CPU performances. 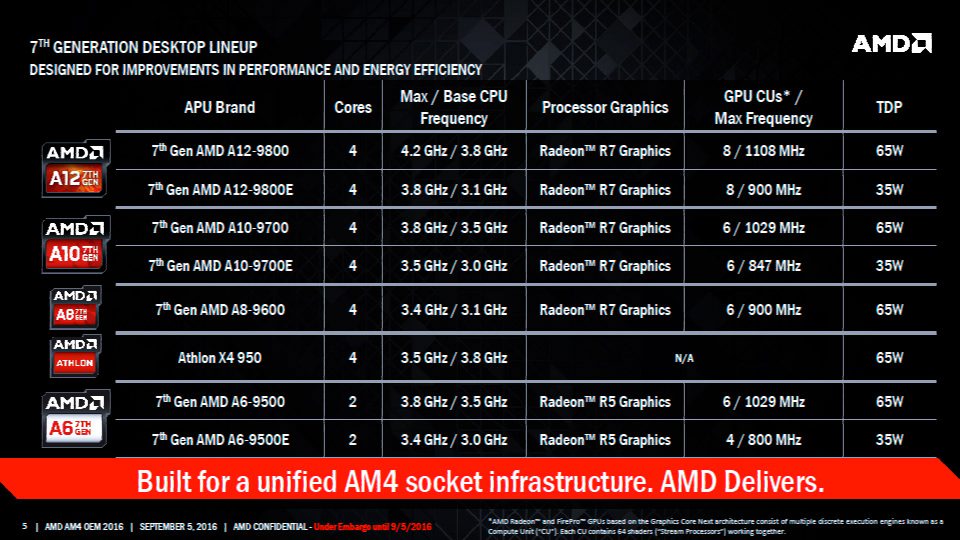 The new 7th generation Bristol Ridge APUs includes support for 4K Ultra HD video in both H.264 and H.265 formats. DirectX 12 games will also be able to run on Windows 10 with latest APUs.

AMD will release high-end “Summit Ridge” processors in 2017. AMD claims that it can match Intel’s current highest end processors in performance. Summit Ridge chips will also use the AM4 socket.

The RX 480 4GB of GDDR5 memory on a 256-bit memory bus resulting in a total bandwidth of 256GB/s. The card supports AMD FreeSync technology and HDR gaming via its HDMI 2.0b and DisplayPort 1.3/1.4 display connectors.

Sulon is offering a sneak peek of the Q VR headset. The Sulon Q incorporates both AR and VR, and is being billed as an “all-in-one, tether-free, ‘wear and play'” headset, which also incorporates spacial computing features that work with Windows 10. Powered by an AMD processor, Sulon says the Q boasts “console-quality” graphics, without needing to be attached to a computer or console.

The Sulon Q™ headset harnesses the latest in processor technology using the recently launched AMD FX-8800P processor at up to 35W with Radeon™ R7 Graphics leveraging AMD’s Graphics Core Next architecture. The full performance of 4 compute cores and 8 GPU cores are unlocked through a revolutionary Heterogeneous System Architecture (HSA), enabling the cores to share memory to work together for dramatic performance and efficiency

AMD’s upcoming processor — codenamed ‘Zen’ — will feature no fewer than 32 cores. We already knew that Zen would have ‘a lot’ of cores, but a CERN engineer has now revealed not only how high this figure is, but more details of the processor. But this is not a true 32-core processor — AMD is using a little trickery to up the numbers.

During a presentation, CERN engineer Liviu Valsan revealed that Zen will feature up to 32 physical cores and will support Symmetrical Multi-Threading. This is achieved by combining two 16-core CPUs on a single die with what is described as “a next-generation interconnect”. AMD’s CPU refresh has been a long-time coming, and there’s a little more we know about Zen.

As well as 32 cores, the upcoming x86 processor will:

There’s no word on when Zen processors will see the light of day, but launch is expected by the end of the year.

If you’re planning on building a new PC rig specifically for VR gaming in the near future, AMD has finally made picking parts a tad easier with a list CPUs the company suggests for VR gaming. Of course, we’ve known which Intel CPUs were recommended for a while, but those who find themselves on team red can now start planning their necessary upgrades. Here’s the current list of nine CPU models AMD recommends for VR applications, as reported by Forbes:

Of course, this list is only for those planning on building their own PCs to handle VR. If you’re planning on being an early adopter of the Oculus Rift, you can always pick up an Oculus Rift PC bundle later in February.