Lenovo is expected to announce Miix 320 at Mobile World Congress later this month.

WalkingCat posted the details of Lenovo Yoga 720 13-inch and 15-inch 2-IN-1. Check out full details below.

Productivity That Never Slows Down

The Yoga 720 delivers unprecedented power for a 15” convertible. Featuring the latest Intel processors and up to 1 TB PCIe SSD storage, you’ll enjoy lightning-fast boot-ups and transfer times. And with up to 8G memory onboard and max 16G, you’ll be able to use more apps, large programs and files without being slowed down.

Combining the best of Windows with brand new features, Windows 10 Home is designed to streamline your life. Need a restaurant suggestion? Ask our digital assistant Cortana—we’ve got you covered.

Available in Platinum Silver or Iron Grey, the Yoga 720’s sleek aluminum design is sure to turn heads. At only 19mm thick, it’s a perfect complement to an active lifestyle. And it’s more than just a traditional laptop: The Yoga 720’s 360-degree hinge means you’ll be able to fluidly transition into tablet mode for reading on the go, tent mode for streaming videos, and more. With this much flexibility, you’re sure to find different—and better—ways to work and play.

Brilliant Clarity of Up to 4K

Enjoy vibrant color and detail with up to a 4K Ultra High Definition screen, edged on three sides with razor thin bezels that maximize your viewing experience. You’ll be able to watch movies and video chat with a clarity that will make it feel like you’re really there.

Sketch a portrait for your next gift, or send notes on a friend’s short story, with the optional Lenovo Active Pen. Pin-point accuracy, palm-rejection technology, and astonishing pressure sensitivity provide a natural, intuitive pen experience. It’ll remind you how creative you already are.

Stay in Touch with Crystal-Clear Audio

Energize a room with your favorite playlist, or stay perfectly tuned on a conference call. JBL speakers with Dolby Audio Premium dynamically adjust your sound to deliver enhanced bass and volume without distortion. You’ll be able to count on rich, immersive audio.

The Yoga 720 features a Type-C USB port with support from the revolutionary Thunderbolt port, delivering lightning-fast connectivity and convenience—whether you’re charging, transferring files or want to connect your screen to a larger display.

Streamline your day with the Yoga 720’s fingerprint reader, which safely and securely makes passwords an inconvenience of the past. And with the support of Windows Hello, you’ll be able to make secure purchases at participating retailers with one touch of your finger

Let’s start with Lenovo ThinkPad P51 which comes in a number of configurations. You will have the option to select an Intel Xeon E3-v6 processor or a 7th-generation Core chip with Nvidia Quadro M2200M, and up to 64GB DDR4 RAM. The laptop also features 4K display and weighs only 5.6 pounds. You can even select operating systems between Windows 10 Home, Pro, Red Hat Enterprise Linux, and Ubuntu Linux.

Lenovo’s ThinkPad P71 is as powerful as P51 with the same configuration, apart from the display. Lenovo ThinkPad P71 comes with the 17-inch display. You can also push your graphics card up to Nvidia Quadro P5000M. This will also make it VR-ready. According to the company, the VR ability to bring a new visual perspective and immersive experience to our customers’ workflow.

Finally, the Lenovo ThinkPad P51s is a portable laptop. It comes with a 7th-generation Intel Core-series processor, Nvidia Quadro M520M, and up to 32GB RAM. You can select Windows 7 Professional or 10 Pro as OS. The laptop also includes a trial for Office 2013.

Last year, Lenovo introduced Halo keyboard with the Yoga Book. The keyboard is also a touchscreen, and it would allow the user to switch between keyboard and a blank interface for pen input. However, no pen input support added to this model.

The new Yoga A12 Android Tablet is aluminum and magnesium body mid-range model which is powered by an Atom x5 processor, 2GB RAM, and 32GB of internal storage. The tablet also includes a 12.2-inch HD display. It comes with Android and there is no option for Windows 10 and Chrome OS.

Lenovo Yoga A12 is just 5.4mm thick and weighs less than one kilogram. You’ll be able to buy it from lenovo.com starting February 8 for $299 with Gunmetal Grey and Rose Gold color options.

Lenovo today launched its Lenovo N23, N24 and ThinkPad 11e laptops with Windows 10 and Google ChromeOS. The latest laptop lineup is targeted towards students. According to the company, the new laptops will give students and teachers maximum flexibility and choice to integrate new notebooks into their existing classroom environments.

ThinkPad 11e
Featuring the latest generation Intel processors and brighter displays, ThinkPad 11e, and 11e Yoga will be available with Windows 10 or Google Chrome operating systems, giving students and teachers maximum flexibility and choice to integrate new notebooks into their existing classroom environments.  Engineered for education, ThinkPad 11e and ThinkPad 11e Chromebooks are focused on reliability and productivity, both in and out of the classroom.  Passing a vigorous series of 12 military standard spec procedures to ensure maximum durability, using gorilla-glass for maximum screen protection, a water-resistant keyboard and new and improved mechanically anchored keys, the ThinkPad 11e Chromebook can keep up with the demands of a hectic classroom. And with up to 10 hours’ battery life, it can last the school day and beyond to keep a student’s productivity going. 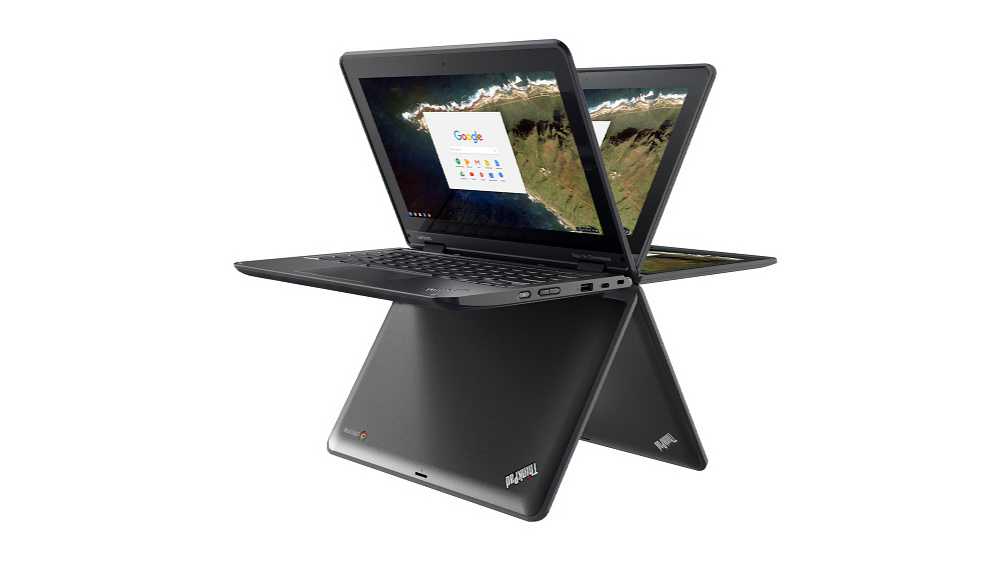 Lenovo N23 Chromebooks
Lenovo is also expanding it’s rugged, designed for education, N-series family with the addition of the Lenovo N23 Chromebook and N23 Yoga Chromebook. Like the ThinkPad 11e Chromebook, the N23 is also available in traditional clamshell and Yoga form factors. In addition, the N23 Yoga version is the first Lenovo Chromebook equipped with an ARM-based processor, optimized to run the Google Play Store apps.

Today at CES 2017, Dell, HP, Acer and more companies displayed their Windows Holographic VR headsets. All of these VR headsets share same concept, a pair of screens inside and a pair of cameras on the outside.

Windows Holographic headsets sports front two cameras with each uses slightly different positioning to examine the space around the headset and track your position. It may require more processing on the part of the computer, but it also means the headsets can be smaller and lighter and less complicated.

Currently, Windows Holographic is still a work in progress and will be released with Windows 10 Creators Update in April 2017. There is no detail on headsets pricing or availability.

Lenovo launched MiiX 720 Tablet at CES. The tablet is powered by 7th Generation Intel Core i7 Processor, up to 16 GB DDR4, and Storage option up to 1 TB PCIe SSD. Also, you can get up to 8 hours of battery life with the tablet and an always-on USB port for charging your phone even when your PC is off.

The Lenovo Miix 720 also includes an integrated infrared camera with Windows Hello support to instantly recognizes your face to unlock the device. The Lenovo Miix 720 measures in at just 0.57 in (14.6 mm) and 2.4 lbs (1.1 kg) including the precision touchpad-enabled keyboard. The tablet offers a 12-inch QHD+ touchscreen with a 2880 x 1920 resolution crisp clarity display.

On the other hand, Lenovo’s Active Pen 210 can let you use the shortcut button to open your email and offers 4,096 levels of pressure sensitivity for a precise drawing experience, like writing on paper, and clips into a convenient pen holder. The device also includes USB-C, which lets you power up to two 4K monitors via Thunderbolt 3. The back-lit keyboard offers full-sized keys. There is also a 5-megapixel rear-facing camera. The kickstand has been improved, and now offers 150-degree rotation.

Meanwhile, the new ThinkPad X1 Tablet is essentially a smaller and less powerful version of the X1 Yoga as it’s supposed to be a tablet. The device also comes with Intel’s 7th gen processors. The tablet offers up to 1TB of SSD, up to 16GB of LPDDR3 RAM with includes a 12-inch 2K IPS display. You can get 10 hours of battery life. Now you have the option to select from Windows 10 Home or Pro editions with the Tablet.

The ThinkPad X1 Tablet has unique modules that offer port expansion and up to 5 hours of additional battery life, and an integrated projector option making it easier to go from creation to presentation.

The all new Lenovo X1 Carbon has been redesigned to include Thunderbolt 3 ports, which allows for super-fast and slim port connection that lets you transfer data quickly, super-fast LTE-A Wireless WAN and WIFI CERTIFIED WiGig options that deliver superlative performance and connectivity.

The laptop comes with a 14-inch IPS display. The display also allows you to select two different variants between a WQHD model and an FHD model. For security, a fingerprint reader is available with Windows Hello. Also, Lenovo’s ThinkPad X1 Carbon 2017 offers up to 15.5 hours of battery life.