Microsoft will now allow Xbox developers to connect their games to networks outside of Xbox Live and Windows 10. Rocket League will be among the first to benefit, joining the Xbox One version of the frenetic soccer cars hybrid to users of the PC version — massively expanding the matchmaking pool in the process. Microsoft effectively invited Sony and its PlayStation Network to join the party, and now the Xbox’s chief rival has responded, appearing open to the idea.

In a blog post on Xbox Wire, ID@Xbox champion Chris Charla stated that Xbox games will be able to connect with “other consoles” and PC networks.

Sony praised their efforts to bring cross-platform play to consoles, touting the MMO Final Fantasy 11, which featured cross-play as early as 2002. The console giant said it would be happy to discuss cross-platform play with “any publishers or developers”, which suggests that Rocket League’s player pool could eventually expand even further.

“PlayStation has been supporting cross-platform play between PC on several software titles starting with Final Fantasy 11 on PS2 and PC back in 2002. We would be happy to have the conversation with any publishers or developers who are interested in cross-platform play.”

Microsoft has been exploring the realms of cross-platform play for quite a while, but only for internal titles. Gigantic and Killer Instinct are both slated for cross-platform play between Xbox One and Windows 10. Now that they’ve opened up the system to extend to third-party networks, that is only going to benefit gamers and developers whose games depend on large player pools for things like faster skill-based matchmaking algorithms. It’ll also massively benefit MMOs like the aforementioned Final Fantasy 14, who depend on thriving communities of players to remain fun.

The first two expansions for The Division will land on Xbox One consoles before PS4 and PC gamers. Ubisoft has announced today that the first two of the three paid expansions for The Division – Underground and Survival – will have 30-day exclusivity on Xbox One, starting from the day of their respective launches. Underground, the first paid expansion, puts Agents in New York’s labyrinthine underworld of tunnels and subways to track down groups of dangerous enemies. Survival, the second paid expansion, tests players’ ability to survive and gather crucial supplies in an incredibly hostile environment.

With mere hours standing between fans and the game, Ubisoft also reminds gamers that “The Division’s paid content is available via the Season Pass, Gold Edition, or Collector’s Editions of the game.”

German based online retailer has posted a listing for the next entry to Electronic Arts Battlefield 5, stating that the game is going in time to the First World War. While the retailer has listed few details regarding the title, the listing claims that Battlefield 5 will release later this year. The game will be offering a multiplayer tactical shooter experience set during the World War I. This would be a first time in the series. 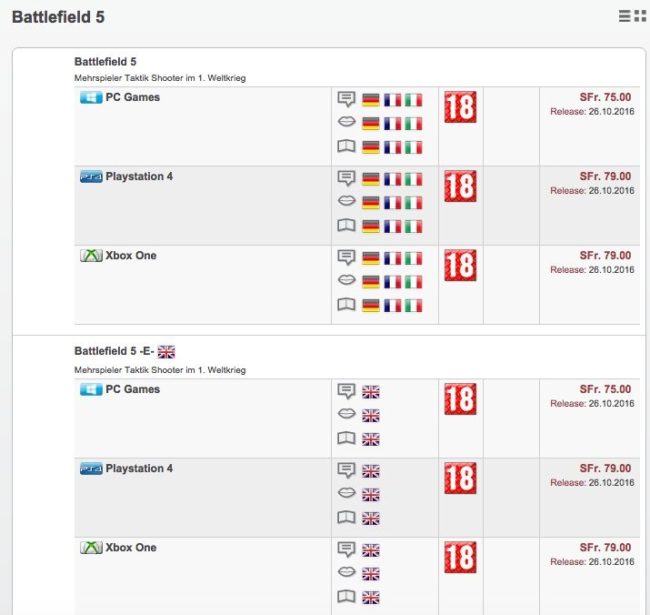 The listing conforms with previous rumours which proposed that the game will be the fifth entry in the core Battlefield series, set in a military environment. Electronic Arts has confirmed a Battlefield release scheduled for 2016. It’s currently unclear if the retailer mistakenly posted these details ahead of an offical announcement, or an employee added unconfirmed speculation to the product’s description. Battlefield 5 will be releasing this fall on Xbox One, Playstation 4 and PC.

PC gamers who have been waiting patiently for Electronic Arts to launch the reboot of the Need For Speed series will get their wish on March 15, the newly-announced official release date. The rebooted arcade racing game launched for the Xbox One and PlayStation 4 consoles in the fall of 2015.

The PC version will include features such as an unlocked frame rate and support for 4K displays. It will also contain all of the improvements that have been released for the console versions, including its Icons and Legends updates. It will also add Manual Transmission support, which will be offered to the console ports via a free update.

“With the release on PC we’re also adding steering wheel support for a selection of wheels from Logitech, Thrustmaster and Fanatec. As with Manual Transmission this is a decision taken based purely on Community feedback. We’re dedicated to bringing you the best Need for Speed experience possible and your feedback has been playing a huge role in that.”

Members of the recently-launched EA Origin Access subscription program will be able to play a free trial of the Need For Speed PC reboot on March 10.

As a game steeped in near-future realism, creating diverse and unique enemies probably presented an interesting design challenge for the team at Ubisoft Massive. This latest trailer gives us an idea of how The Division’s enemy factions will operate, and what role they’ll fill in the game’s mysterious plot.

For those who don’t know, The Division takes place in a near-future New York City destroyed by a man-made viral outbreak. Body bags litter the streets and buildings rest abandoned. The city is overrun with violent criminals, dangerous psychopaths and desperate survivors.

The earliest enemies you’ll encounter are the Rioters, loosely organised bands of vagrants taking advantage of the social breakdown — looting and pillaging. Rioters formed some of the game’s most simplistic enemies in The Division’s recent beta test, but they’ll rush you with baseball bats, Molotov cocktails and smoke grenades — so don’t take them lightly.

Second up are the Rikers, a band of escaped convicts from Rikers Island — a real-world prison complex with an average population of 10,000 inmates. The Rikers have transformed the prison into a self-styled fortress and are expanding their territory into New York City itself. A deleted reddit post recently claimed that Rikers Island would house The Division’s end-game raid content, rumored to feature teams of 8 players. For now, take that rumor with a pinch of salt!

The third faction showcased in the trailer are the Cleaners, comprised of hazmat-clad sanitation workers previously responsible for the disposal of contaminated material. The Cleaners appear to have lost their grip on reality during the collapse, turning their flame-throwers on anything, or anyone they deem to be infected.

The final group revealed are the Last Man Battalion (or LMB). The LMB are a former private military company, hired by Wall Street corporations to protect their assets, presumably to be recovered once the outbreak had ended. Sadly for them, the outbreak didn’t end, and now this self-styled army has taken up a new purpose: imposing fascist rule over the surviving citizens.

These are some of the enemies standing between you — the Strategic Homeland Division — and the recovery of society. The Division answers only to the U.S. President, and its members are handpicked from all levels of the military to receive special training, intelligence, and technology. Division agents lived as regular citizens and were to be activated only as a last resort line of defence against a devastating threat. As a Division agent, it’s your job to save society from itself, and bring the outbreak to an end.

The Division’s beta will return on February 18th, 2016 for Xbox One owners, and will be open to everyone ahead of its final March 8th, 2016 launch on Xbox One, PC and PS4.

This latest trailer details how the game’s protagonist, Takkar, will rise from the ashes of his destroyed tribe and embark on a solo mission to rebuild his community, survive a savage wilderness, and exact vengeance on those responsible.

As mentioned, you play as Takkar of the Wenja Tribe, infamous for their beast taming abilities. Your village has been destroyed, and your community has been enslaved, killed and, in some cases, cannibalized by neighbouring savages.

In the trailer, Ubisoft details two of the game’s antagonistic groups: the malicious and cannibalistic Udam tribe, who hunt both animal and man alike, and the Azila tribe, who enslave their enemies and wield fire in fanatical devotion to the Sun God. You’ll have to master all of Takkar’s abilities and weapons to defeat both tribes and their “merciless” leaders, and rescue the Wenja tribesmen and women who have been taken captive.

The trailer also details Far Cry Primal’s dynamic ecosystem, day and night cycles, crafting systems and some of the game’s tameable creatures — some of which can be both ridden into battle and sent in head-first to wreak havoc on enemy outposts and settlements. When combined with Takkar’s arsenal of bows, spears, slings, traps, and primitive bombs, Far Cry Primal aims to chart your ascension to apex predator across a “great expanse” of colorful open-world terrain.

Capcom debuted a fully CG trailer for the upcoming Street Fighter 5 release and lo, it is glorious. Each of the game’s 16 playable launch characters makes an appearance, M. Bison raises some havoc and Ryu gets super-duper angry. The game hits store shelves next Tuesday, February 16th but you can see the animated trailer after the break.