Today, Microsoft launched it’s new Xbox One X console in India. The Xbox One X is the world’s most powerful console that brings 4K gaming and 4K entertainment to local gamers. With 40 percent more power than any other console. The console is already available in the U.S and European countries. 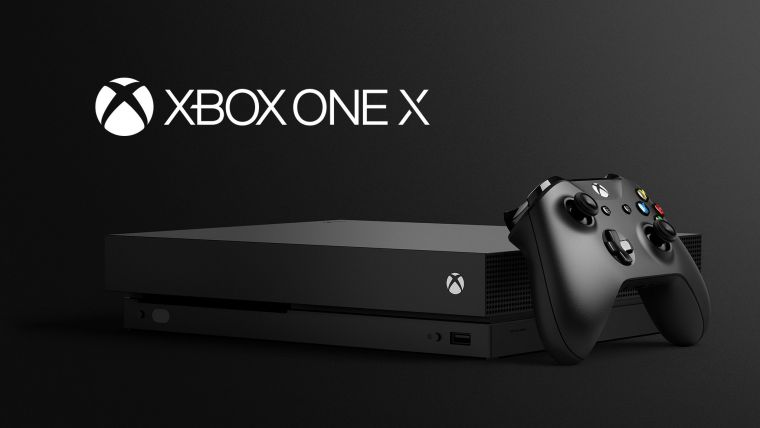 Priyadarshi Mohapatra – Country General Manager, Consumer & Devices Sales, Microsoft India. – “We are delighted to offer gamers the world’s most powerful console with access to the largest and most diverse games lineup in Xbox history, including Forza Motorsport 7, Assassin’s Creed: Origins, Cuphead and Super Lucky’s Tale, out of more than 1,300 titles and more than 220 exclusives available on the Xbox One X, just a few short months after the device’s global launch. We’ve listened to our community and are excited to be bringing this new console to Indian gamers“.

Xbox One X Enhanced games have been updated or built specifically to take full advantage of the world’s most powerful console and its 4K UHD and HDR capabilities. More than 80 new and existing games are enhanced for Xbox One X to take advantage of its full power.

The Xbox One X is now available for INR 44,990. Read full Xbox One X specs and other details here.

For Honor update 1.17 will soon roll out for players on PS4 and Xbox One. According to the For Honor 1.17 patch notes, there are changes for Fighters as well as game improvements and fixes. In addition, For Honor version 1.17 also fixed an issue where the player unable to get back into matchmaking after the group leader quits a match with the group following. Check out full details below.

General Matchmaking Changes in For Honor 1.17

War Map Fronts will now be as follows:

Previously, update 1.16 was released with Xbox One X support. Check your game update and download latest For Honor update 1.17 on PS4, Xbox One, and PC.

Microsoft is now offering a free copy of PlayerUnknown’s Battlegrounds Game with the purchase of Xbox One X console. This offer is for a limited time only and will run between December 17 and the end of 2017. The combined console and game will now cost you $499.

Just recently, Battlegrounds made its console debut on the Xbox One through the platform’s early access-like Xbox Game Preview program. Within 48 hours of its December 12 release, Microsoft says PUBG surpassed 1 million players on the Xbox One alone.

Add any of the following to your order for instant savings:
• Get PLAYERUNKNOWN’S BATTLEGROUNDS – Game Preview Edition*
• Save $10 on an Xbox Wireless Controller
• Save $10 on an extended 3-year warranty (Microsoft Complete for Xbox One)

Get the offer from here.

For Honor update 1.16 with Xbox One X support will soon roll out for players. According to the official For Honor 1.16 patch notes, the game is now rendered at 4K on Xbox One X with a real-time variable resolution (up to 4K-2160p) coupled with hardware scaling that output to TV resolution. In addition, many water surfaces will now show dynamic reflections. Check out full details below.

Check your game update and download latest For Honor update 1.16.

The Evil Within 2 update 1.02 is now rolling out on Xbox One, PS4, and PC. According to the Evil Within 2 patch notes, the update has added support for Xbox One X and brings improvements for PlayStation 4 Pro.

In addition, the new The Evil Within 2 patch 1.02 also includes minor bug fixes as well as general memory and performance optimization. The patch size is around 1GB on PS4.

The Evil Within 2 update 1.02 patch notes

Check your game update and download latest the Evil Within 2 update 1.02 on PlayStation 4, Xbox One, and PC.

Microsoft today confirms that Xbox One X is the fastest-selling Xbox pre-order ever. On Sunday in Germany, the software giant unveiled the Xbox One X Project Scorpio Edition. The company also opened pre-orders for the console ahead of its release on November 7, at $499. 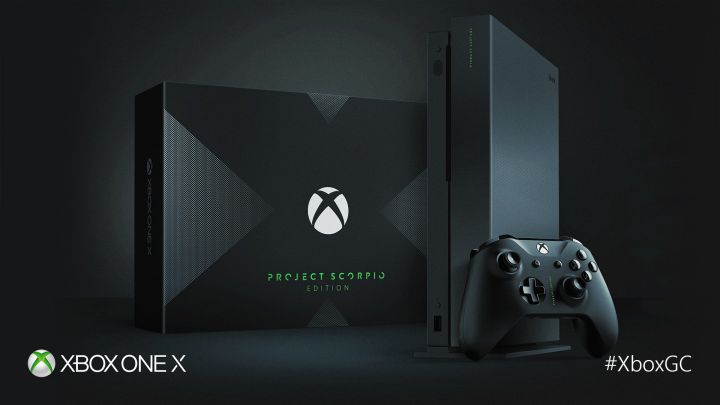 According to the Xbox marketing chief Aaron Greenberg, “Within just a few days, we saw record-setting sell-out times and are currently sold out in many countries around the world. You, our biggest fans, have pre-ordered more Xbox One X Project Scorpio Edition consoles in the first five days than any Xbox ever.”

There is no word when Microsoft will open pre-orders for the ‘standard edition’ of the console. The standard Xbox One X will also be priced at $499.

Microsoft officially unveiled Xbox One X earlier this year at E3 2017. The new Xbox One X will be the most powerful console on its way to market, the flagship device delivers major leaps in both graphical fidelity and performance.

Where to Buy Xbox One X

Xbox One X Project Scorpio Edition (Limited) with free stand is available for buy now for $499 USD until supplies run out.

Buy Xbox One X from Microsoft (US)

Buy Xbox One X from Amazon (US)

Buy Xbox One X from BestBuy (US)

New images of the Xbox One X Project Scorpio Edition console and its retail box leaked online today. Microsoft is expected to announce few more details about Xbox One X at GamesCom. The company will also reveal the console pre-order date and it looks like they may have limited edition available for early adopters. 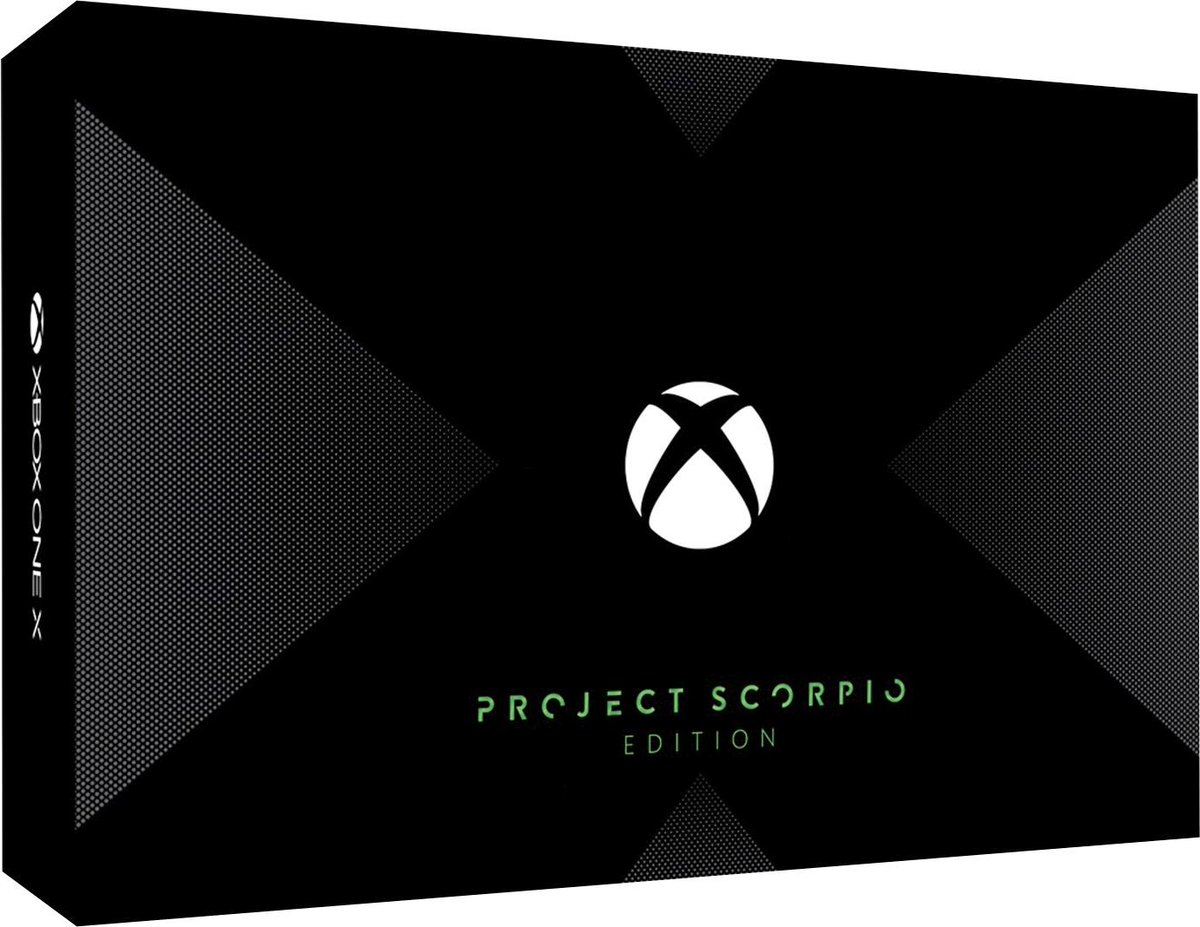 Evan Blass (evleaks) has posted the image of the console and the box of a Project Scorpio edition of the Xbox One X. The controller image is also leaked separately and this is all likely to be branded under the “for the gamers” series of hardware. 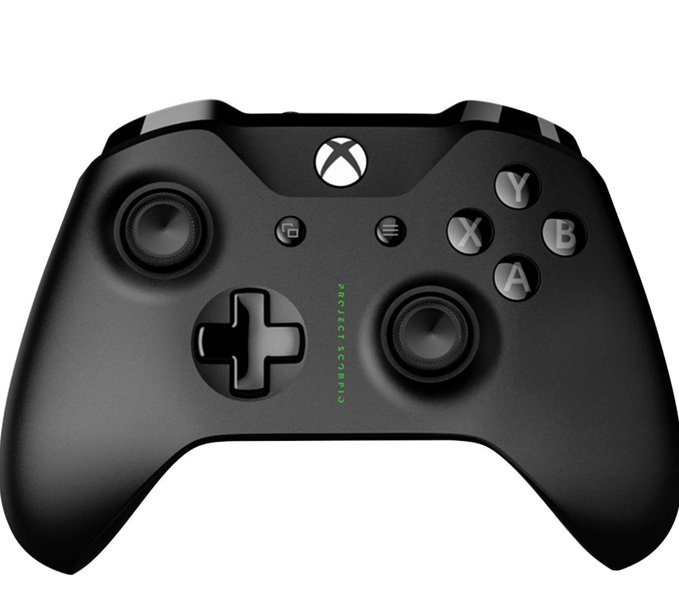 Previously, Microsoft also released Xbox One with the Xbox One Day One Edition (Limited Edition). Apart from the limited edition branding, the company may offer extra storage as a reward for early adopters. 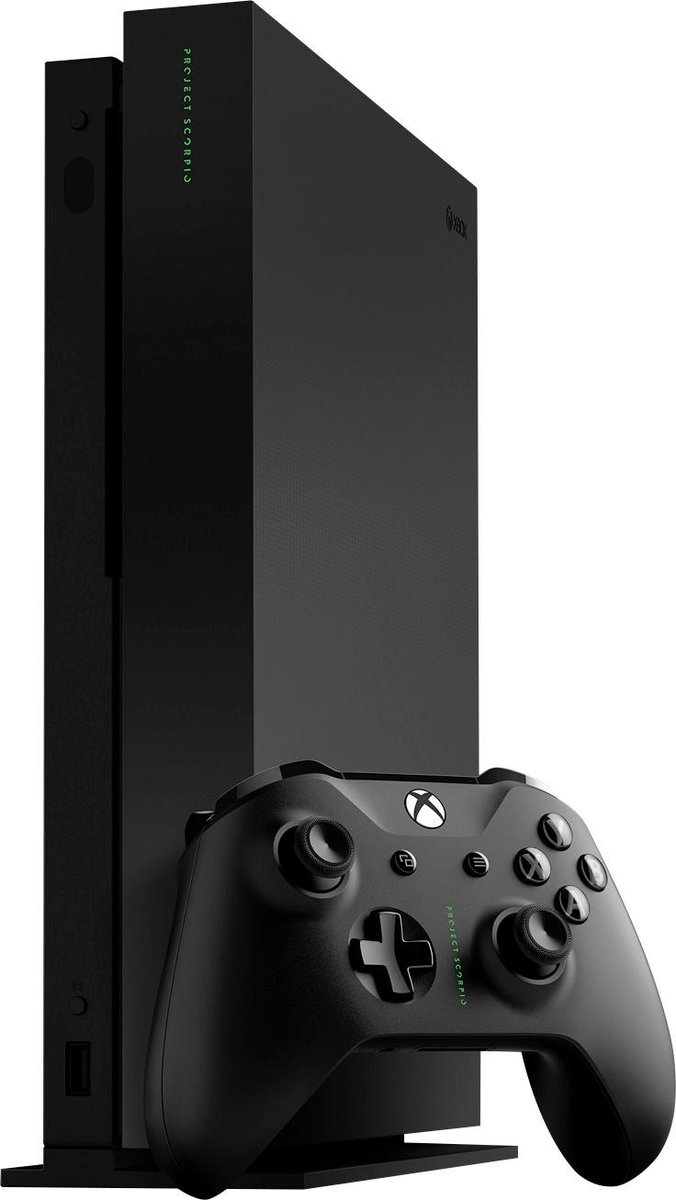 More details about the console will be available on Sunday.

Minecraft Better Together Update will bring cross-platform play. Anyone playing the game on Windows 10, iOS, Android, Xbox One, Nintendo Switch and VR devices will be able to play online together. So going forward, the edition you’ll find on Xbox One, Nintendo Switch, mobile and VR will simply be known as ‘Minecraft’, a separate entity from ‘Minecraft: Java Edition’.

According to the company, any DLC user purchase will be accessible amongst the various devices at no extra charge. If you buy the Greek Mythology pack on Nintendo Switch, you’ll also own it on the mobile, Xbox One and Windows 10 Editions to no extra charge.

Minecraft for your mobile or VR device will get a free update this summer. Minecraft: Xbox One Edition and Minecraft: Nintendo Switch Edition owners will receive a new version of Minecraft for free, and your existing worlds and DLC will come along to the new version with you.

This Summer, the Better Together Update will come with a server browser option in the Minecraft start menu. This’ll let you search a list of servers which you can join right away. Developers will launch four servers – Lifeboat, Mineplex, InPVP, and CubeCraft – with more to follow. The developers also made sure that parental controls and other safety features will be in place, so you decide what your child can access.

The Super Duper Graphics Pack. On top of the free 4K update, the Super Duper Graphics Pack introduces features like dynamic shadows, lighting that streams through fog, movement in leaves and grass, new textures for mobs and villagers, directional lighting, edge highlighting and more. This Pack will be available on Xbox One and Windows 10, performing best on high-end PCs and the Xbox One X (formerly known as Project Scorpio).

A $799.99 The Assassin’s Creed Origins Dawn of The Creed Legendary Edition will be for the most dedicated of fans. It will come with a 28.7-inch statue of the main protagonist Bayek Statue, a gold steel book edition of the game and a season pass that will give access to future content. The package will also include a world map, four lithographs, a soundtrack, an art book and cards, and Bayek’s eagle amulet.

The Assassin’s Creed Origins Dawn of The Creed Legendary Edition will be sold exclusively on Ubisoft’s website. The company will sell only 200 pieces in the United States and 999 units across the world.

The eagle amulet, lithographs, and a certificate of authenticity will ship in July, with the remaining items and the games coming out when the game does in October. The game will arrive on October 3.