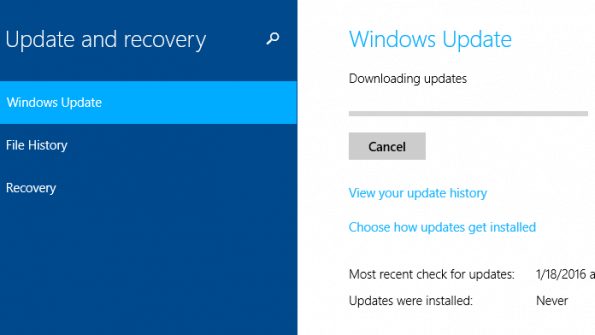 Next week, Microsoft is expected to add another cumulative patch to the Windows 10 desktop OS according to sources familiar with the matter. The update will bump the OS to 10586.71 up from the current 10586.63 released on January 12.

The Windows Update is scheduled tentatively for Tuesday, January 26 aka ‘Patch Tuesday’. Like all OS patches and updates, any last minute issues could halt or delay the release.

There is no immediate word on what, if anything is new, but like previous updates this will likely address bugs and general OS optimizations for those on the desktop PCs, Surface, laptops and more. More information about the cumulative update will probably come forward when Microsoft release them to the public, but no new features are expected. As usual, there will likely be a small flood of updates to Windows core apps like Mail, Messaging and more following the patches.
A looming firmware update for the Surface Pro 4 and Surface Book is also reportedly on the horizon and may arrive with this update. However, more information on such a release is not yet confirmed. An earlier rumor suggested that this firmware update would come this past week, but that did not happen. Microsoft previously announced that they would fix the ongoing Connected Standby/InstantGo power issues with both devices sometime in early 2016. They company later apologised for “any frustration” customers are experiencing with the cutting edge hardware.

Microsoft has been fairly consistent with releasing two patches per month for the OS in and ongoing attempt to keep Windows 10 up to date as part of their Windows as a Service (WaaS) paradigm.

Our reports have also revealed that build 10586.71 is being tested on Windows 10 Mobile and it too could be released for Insiders on the Fast Ring before a wider general release sometime in February for non-Insider phones. This information is speculative at this time.

Microsoft last updated the Insider Fast Ring for Mobile on Friday, January 8 when the OS was updated to 10586.63. However, that update has not yet been approved for non-Insiders, and it may just skip to .71 or later.

Microsoft has been keeping their mobile and desktop OS with the same build numbers for a few weeks now. However, their releases are sometimes timed together, other times Mobile comes a few days later.

Insider Fast Ring update have diverged lately with the desktop OS being branched to Redstone (RS1) for early testing by users, whereas Mobile is still in the critical patch phase to improve general reliability before going to the next chapter of Windows 10 Mobile Redstone for 2016.

Pramod Singh - August 18, 2016 0
The official Facebook app is now available on Windows 10 Mobiles. Facebook was testing its mobile beta app since June. Facebook has ported its...